Emily Jones entered the world of MLMs as a customer. It was 2018, she was preparing for a vacation to Europe and looking for inexpensive jewelry to wear. A friend introduced her to Paparazzi Accessories.

The jewelry was cute, she said, so when Christmas rolled around, she ordered additional pieces to give away as gifts. The friend who sold the jewelry to her suggested she sign up to become an “ambassador,” an unpaid salesperson who could earn discounts and commissions by promoting Paparazzi products to her friends and family in person and on social media.

The company and higher-ranking ambassadors, who earned commissions on sales to new recruits, repeatedly pressured her to place large purchases to earn points and build up her inventory for online giveaways. But when the sales and promised commissions didn’t roll in as easily as the recruiters said they would, Jones, who lives in Washington state, found herself $25,000 in debt.

The final straw came this March when, Jones explained, the Paparazzi ambassadors who managed her began pressuring her to use COVID-19 as an opportunity to recruit new ambassadors to work beneath her.

“In good conscience, I could not put someone into the same financial situation that I put myself in,” Jones said. “That’s why I quit.”

Not every company views an economic crisis as a problem. Across the nation, companies that employ multi-level marketing sales tactics are clamoring to recruit new consultants — unpaid sales representatives who, like the Paparazzi ambassadors, earn commissions and other perks by selling products and recruiting other salespeople. Some, the Federal Trade Commission warns, are resorting to misleading claims about products and earnings.

The FTC sent warning letters to nine MLMs in April, ordering the companies to stop circulating misleading claims about the money that could be earned by selling their products during the pandemic and economic downturn.

In one promotional video cited by the FTC, Texas-based Pruvit Ventures, which sells health supplements, claims that selling for an MLM is “a great stimulus package, because you get to teach somebody how to go earn $1,730 literally in the first ten days with the business.”

In many MLMs, non-salaried sales teams derive earnings strictly from sales commissions. They’re called the downline. “Upline” MLM participants who manage teams of salespeople typically take a cut of the commission from the downline they’ve recruited. Some MLMs also charge restocking fees or require minimum purchases of inventory up front in order to remain an active member of the sales team.

Between restocking fees, deductions for an upline’s commissions, and other byzantine charges, only one in four MLM salespeople turned a profit in 2018, according to an AARP survey. Some 47% said they lost money on the venture.

MLM participation typically rises with unemployment, according to Stacie Bosley, an economist who studies MLMs.

“The Great Recession was another situation where there was an uptick in participation,” Bosley said. “People are seeking alternatives in a time of uncertainty, especially when traditional labor market actions might be less available.”

This was the case for Tammy Hanson, who joined a team selling cosmetics for Mary Kay in Austin, Texas, earlier this year.

Austin was looking for employment before the pandemic—her husband works overseas, she said, and she wanted to find a part-time job to occupy her time and generate some spending money.

When Gov. Greg Abbott issued statewide stay-at-home orders in early April, she said, “I thought, oh my goodness, how am I going to be able to make money with this going on.”

Mary Kay, which has introduced an online app where consultants can engage with clients and even help them “try on” makeup virtually, seemed like a good solution, Hanson said.

Austin was one of the lucky ones. The company did charge a startup fee but, within two weeks, Hanson said she’d already earned it back and made a $400 profit.

This isn’t necessarily the typical MLM experience, particularly during a recession, Bosley said. Most MLMs sell products such as cosmetics, clothing and supplements—products people are less inclined to buy when budgets are tight.

“On average the risk right now is higher if you become a distributor,” Bosley said. “Certainly you wouldn’t want to market it as a good time to join. It’s a worse time to join.”

It may be a bad time to join, but because so many people are in economic dire straits, recruiters are still finding willing participants.

MLM recruiters, Bosley said, are typically trained to target their pitches to people in need.

“They’re encouraged to craft a narrative around why the MLM is the solution to the problem,” she said.

This is why MLMs tend to attract people who fall into one of two categories: People who are experiencing income insecurity and those with what Bosley calls an “identity deficit” — they see a gap between where they are in life, in terms of status and recognition, and where they want to be.

Women, minorities, and young adults are most likely to become involved in an MLM, according to the AARP survey. Three-quarters of MLM participants have no experience in commission-based sales before joining.

With inflated sales and marketing materials making the rounds as MLMs attempt to capitalize on the COVID crisis, Daffan said consumers should consider any offer with a critical eye.

Anyone considering an MLM should ask to see detailed financial information — including statistics about earnings at various levels within the company. She also recommends considering the quality of the product sold and whether it’s available for less money elsewhere, and checking with outside parties or the state consumer protection division to see if there are complaints about the company.

Potential sales agents should also consider whether they can afford to risk the time, energy, and money needed to be successful in the enterprise.

But this can be difficult, according to Plexus sales consultant Christina Gray, because more senior consultants and sometimes the MLM itself, engage in misleading and manipulative recruiting tactics. Plexus, which sells vitamins and probiotics, made it sound as though once she recruited three other ambassadors, she would make $100 a month, Gray said. In fact, the $100 bonus was a one-time check.

Gray said she remains a Plexus consultant to earn discounts on Plexus products for herself. But she said she no longer sells for the company because she does not “believe in this model of business.”

The bottom line, Daffan said, is that even in a crisis or a recession, “you shouldn’t need to pay to get a legitimate job.”

Read the original article on Insider

How to make a PowerPoint presentation into a video, so that it plays automatically without you having to click through each slide

Tue Jul 14 , 2020
You can make a PowerPoint presentation into a video in a few simple steps. Klaus Vedfelt/Getty Images PowerPoint is an incredibly useful tool for giving presentations. With the click of a button, you can control how fast or slow you want the slides to progress, and when other extras like […] 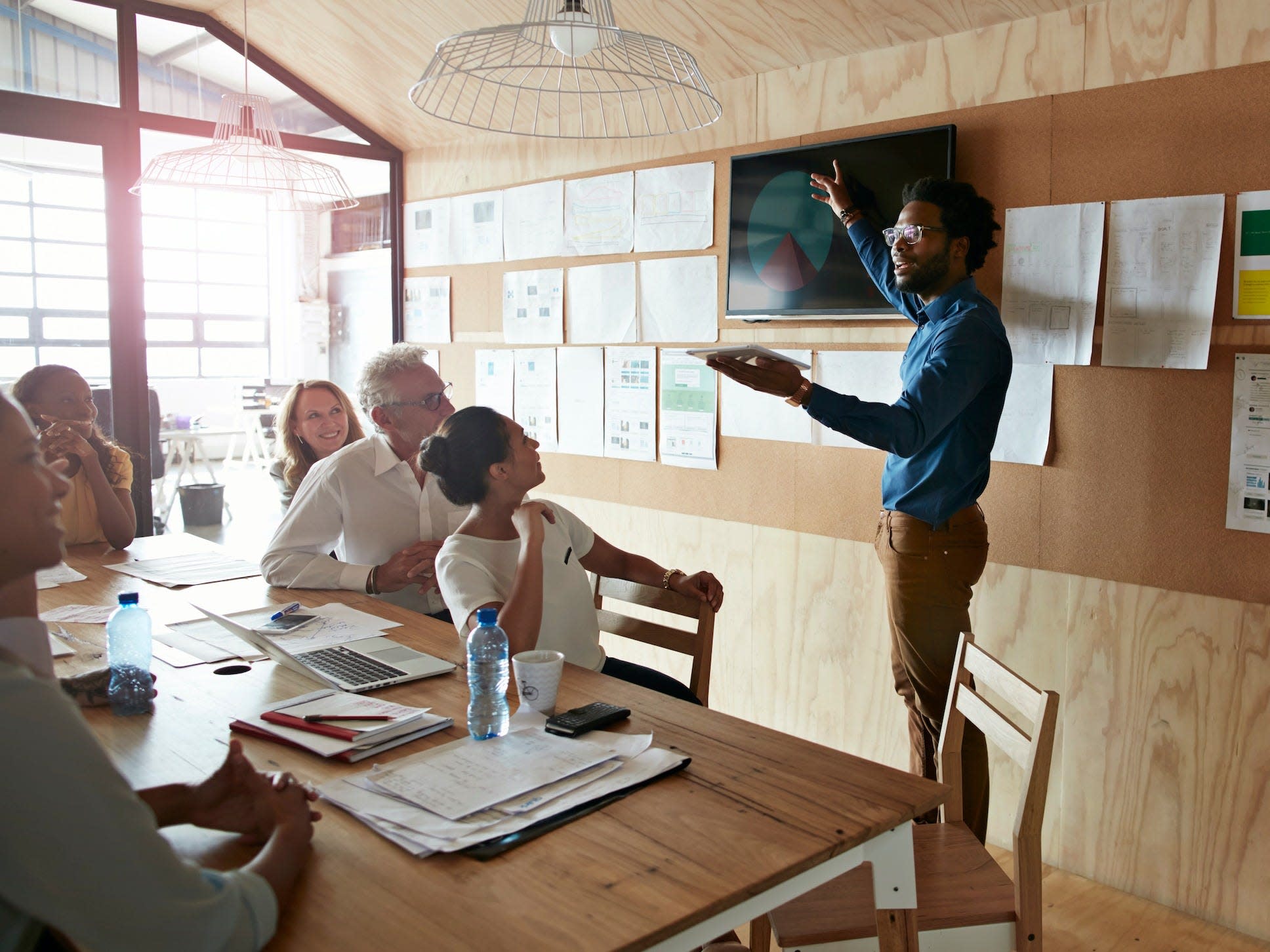