California’s dramatic rolling back of reopening after a surge in coronavirus cases has left businesses scrambling to make sense of conflicting orders. And for some, it has meant closing up shop all over again.

On Monday Gavin Newsom, California’s governor, ordered all bars to shut down and all restaurants, movie theaters and museums to halt indoor operations. In the 30 counties on the state’s monitoring list, indoor operations at places of worship, fitness centers, hair salons, barbershops and malls were also ordered to shut.

In Alameda county, home to Oakland, public health officials took measures a step further over the weekend by prohibiting outdoor dining after three weeks of al fresco drinks and sidewalk meals. For local businesses, the reversal – which followed updated guidance from the state as to which counties could reopen more swiftly – came as a tough blow.

“We were actually making some money by having the outdoor dining open,” said Sarah Kirnon, owner of Caribbean restaurant Miss Ollie’s in downtown Oakland. “We had some really great days, and it was like, oh my God, we’re back to some kind of normalcy. Now that’s being taken away from us.”

Outdoor dining had allowed Kirnon to rehire a few employees. “As a restaurant owner, you don’t want to be using your folks in a disposable way. It’s like we want you back, you’ll be making tips again, and then three weeks later, here we are,” she said. “We can’t let them go because what if next week it changes? We can’t keep playing around.”

At nearby Hoza Pizzeria, co-owner Tom Harney is unsure if the business is “going to make it”. “We’re only able to pay a portion of the rent,” he said. Like Miss Ollie’s, Hoza saw business ramp up when they opened its outdoor patio.

“It’s a huge blow to quickly build this all up, then all of sudden have it yanked out from under our feet,” Harney said.

In Los Angeles, the state’s persistent coronavirus hotspot, working parents were faced with the double whammy of businesses closing once again and the news that schools would remain online for the fall.

“Things ain’t going back to normal. This is a new era,” said Sonya Enchill, a yoga studio owner who had to permanently shut down her location where she operated for four years, because she couldn’t afford her rent anymore. She’s been teaching classes online, and was recently renting space once a week to teach in-person. But with fitness centers once again shut down under the new rules, she doesn’t know when she will return. “Everyone is kind of back to the drawing board.”

In the meantime, Enchill plans to teach Zoom yoga and meditation classes for students at her children’s elementary school when classes resume in August. As kids struggle to adapt, she’s hoping to be a resource for them. “I want to be a Black role model.”

It’s a huge blow to quickly build this all up, then all of sudden have it yanked out from under our feet

In LA, which has seen an alarming rise in new cases, hospitalizations and fatalities, the mayor, Eric Garcetti, warned this week that the city was on the verge having to return to full lockdown restrictions. In April, LA touted its position as the first city to make Covid-19 testing available to all. Now, the region is struggling to keep up with the demand for tests, making it harder to trace and contain the virus.

Kat Williams, an LA chef whose Jamaican catering business has been on hold since the start of the pandemic, has been focused on mutual aid efforts, helping bring meals and groceries to people who are facing the greatest hardships.

“I was not enthusiastic about the reopening at all,” said Williams, who used to do pop-ups at Cuties, a queer coffee shop that has temporarily closed its doors entirely. “We are not ready. We don’t know what this thing is. We don’t need to be eating at no restaurant. Stay home.”

Williams, who co-parents an eight-year-old, was frustrated to see people so focused on reopening certain industries while there is no significant plan for how to address the harsh realities of online school. “If we’re thinking about reopening, let’s think about the educational system. How can we make it up to these children who can’t socialize?”

Williams has also stopped paying their rent in LA, where there’s a moratorium on evictions in place. There’s little plan for how renters are supposed to pay back what they owe once the crisis ends: “They have to do something about this.”

‘The road could be taken out from underneath us’

Rent is at the forefront of Eric Ochoa’s mind. As one of the owners of the bar Elda in San Francisco, a city whose high rents contributed to a blight of abandoned storefronts even before the pandemic hit, most of the money the bar makes now goes toward rent. They were only able to keep two of their 26 staff, and that was only with a paycheck protection loan.

“We’re able to pay the rent, but we’re not able to bring on more staff,” Ochoa said. “All the money is going to the landlords, and it’s not going to help the community in providing more jobs.”

All the money is going to the landlords, and it’s not going to help the community in providing more jobs

Fortunately, Elda is not classified as a bar that serves only alcohol, and can stay open for deliveries and takeout. They reopened outdoor dining last month, but have been taking a more cautious approach to any reopening efforts, Ochoa said.

“We wanted to operate on a more conservative level because the road could be taken out from underneath us. It’s done so again,” he said. “I’ve had friends in the community who are heavily investing in mitigating Covid spread inside, building partitions and all that stuff. Guess what, you’re now sitting on these items that can’t be used until who knows when, and you just spent precious resources building them. It’s painful hearing and seeing all these people taking a leap of faith that things are going to get better and then being told, well, they’ll get better in about six months.”

Newsom held a press conference at Miss Ollie’s in Oakland last month, bringing in good attention for the business. But still, Kirnon feels a lack of support from “the powers that be”.

“So you get the governor coming, and he’s saying all these things, and then he passes things like this order, now we’re going to stop outdoor dining,” she said. “It’s just a constant toll on people, especially the owners.”

Kirnon noted that she was blindsided by the order, and that much of the ever-shifting rules and orders are coming via one quick email that could easily be missed. “And if you don’t get that email and you don’t shut down, then you might never open again,” she said.

“There is no rhyme or reason,” she said. “I don’t think it’s being handled properly, and the panic is being turned over to the owners.” Kirnon thinks cities need to have town hall meetings among small business owners to discuss better communication when it comes to reopening.

But in San Francisco, Ochoa thinks business owners and the government need to accept a harsh truth: coronavirus isn’t going away. He doesn’t believe indoor dining will happen at all in 2020, and says the government should provide loans or funding for businesses to function in the interim. “I would love to open up but even if we opened up now, indoors, and we threw caution to the wind, nobody in their right mind is going to go inside. People are still scared,” he said.

“A lot of operators in California are going to think I’m crazy for just saying let’s call 2020 a wash, but we should,” Ochoa said. “The public and the private sector and the government needs to take a deep breath and commit to a more conservative approach.”

These Retailers Stand to Gain

Wed Jul 15 , 2020
E-commerce is hogging limelight now due to the convenience and safety it is offering amid the ongoing pandemic. E-commerce has revolutionized the retail universe in the recent past. From browsing a product to making quick order, delivery, return, personalization and after-sale service, online shopping addresses all. And COVID-19 jitters are […] 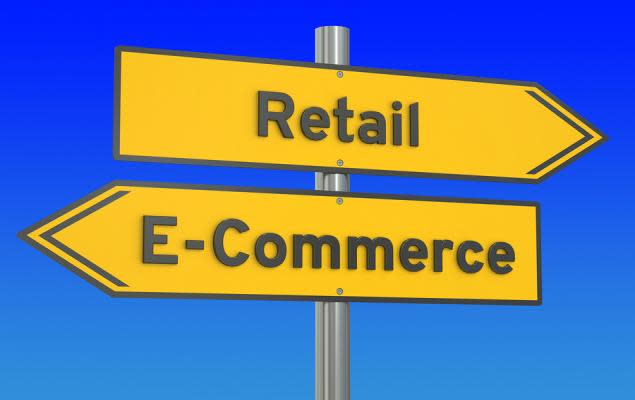