A man, whose abusive tirade at an elderly woman who asked him to wear a mask in a Fort Myers, Florida, Costco on June 27 was caught on a viral video, has been identified as Daniel Maples, a once-leading sales agent at Ted Todd Insurance 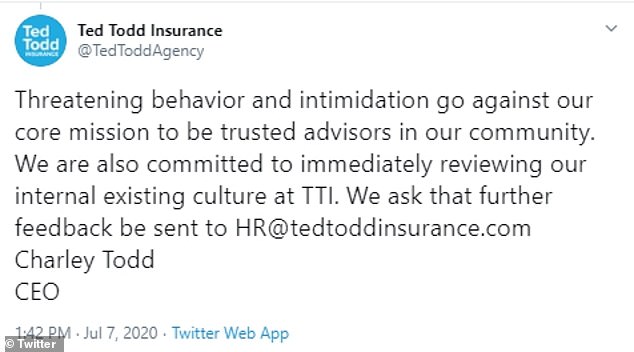 Maples, who had been wearing a ‘Running the World Since 1776′ t-shirt at the time of the incident, was identified after Miami documentary filmmaker Billy Corben, originally from Fort Myers, obtained the video footage from the person who filmed it and shared it online. That person declined to be identified, reports the News-Press.

Corben tweeted the footage, showing Maples screaming the expletive-laden tirade at the elderly woman in the Gulf Coast town center store to his 82,000 followers.

The video has since been viewed more than 11 million times, leaving users horrified at Maples’ behavior.

Corben said he shared the video in the hopes of encouraging people to wear masks during the coronavirus pandemic.

Florida, where cases have been recently began spiking again, has had more than 214,000 confirmed cases more than 3,800 deaths blamed on the outbreak.

In the video Maples approaches the elderly lady and a man believed to be defending her.

He says: ‘You’re harassing me?’ as he clenches his fists, to which the man replies: ‘I’m not harassing you, you’re coming close to me.’

One of the customers who was targeted said: ‘To give Costco the credit, they escorted him out and made me wait inside and monitored him until he left and then they sent someone with me to the car to make sure I’m okay.’ 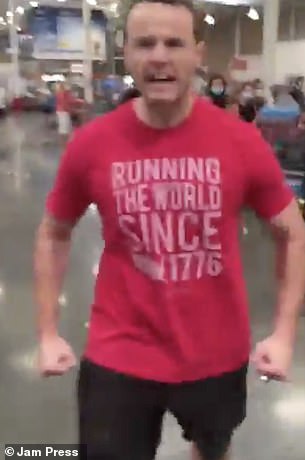 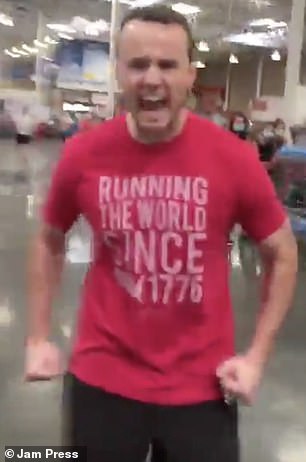 Maples angrily approaches the elderly woman as he clenches his fists before issuing a foul-mouth tirade screaming: ‘Back the f*** up, put your f***ing phone down’

The Ted Todd Insurance company did not return calls when reached out to for comment.

Attempts to reach Maples also were not successful. His profile page at the agency’s website has since been taken down. He was described as liking ‘hot yoga, traveling, cooking and mentoring others’.

The video caused Twitter users to respond in horror at his behavior.

One said: ‘He kept saying “back off”. No one was coming toward him.’

Another wrote: ‘Shame on the managers at this Costco. Never should have let him in without a mask. Here in Hawaii you have to wear it, or they’ll make you leave the store.’

Meanwhile, one added: ‘He seems to feel threatened over nothing. He seems more threatening.’

Although Gov. Ron DeSantis said he has no plans to issue a statewide mask requirement at this time, some counties do have them in place, including Orange County, Miami-Dade County, and Palm Beach County.

The Fort Myers Beach council voted in favor of a mandate by a vote of 3 to 2.

Sun Jul 26 , 2020
“We felt a large commitment like this is going to make more customers and future employees realize that Union Bank & Trust is committed to Omaha,” Weinandt said. Among the building’s amenities is a nearly 5,000-square-foot third-floor terrace that will be a common area. The fifth floor will have a […]