Rep. Max Rose, one of the most vulnerable Democrats in Congress this November, couldn’t have written a better headline himself.

“Rep. Max Rose Deploys With National Guard to Get Hospital Ready For Coronavirus Patients,” read an April 17 article about the freshman congressman from New York. The article — boosted into circulation in New York by thousands of dollars in targeted Facebook ads — was mostly a rewrite of the congressman’s press release from the previous day. The same thing happened the next month: A May 28 press release touting coronavirus legislation of Rose’s quickly turned into an article with almost exactly the same headline as the release.

The articles and Facebook ad dollars look like the efforts of a run-of-the-mill political group. But they are actually from a news outlet: CourierNewsroom.com, also known as Courier, which was created and funded by the Democratic-aligned digital organization Acronym. Courier has spent over $1.4 million on Facebook ads this election cycle, mostly to promote its flattering articles and videos about more than a dozen endangered House Democrats at the top of the Democratic Party’s priority list this November, according to Facebook’s political ad tracker.

But because Courier is organized as a media outlet, it does not have to disclose its donors or the total money it spends promoting Democratic politicians.

The $1.4 million in Facebook ads is likely just a fraction of the money behind the Courier project, which includes a newsroom of at least 25 people and eight separate websites with content often focused on local issues in presidential swing states. But this activity — creating an unregulated advertising stream promoting Democratic officeholders, more akin to a PAC than a newsroom — diverges from other partisan news outlets that are proliferating online as local newspapers struggle.

And in setting up the enterprise, Acronym — which is financed by some of the deepest pockets in progressive politics, such as liberal billionaires Reid Hoffman, the co-founder of LinkedIn, and Laurene Powell Jobs, the majority owner of The Atlantic — has stirred outrage and provoked debate about the ethics of such political tactics and the future of the press.

Backers believe they are simply ahead of the curve. Courier, they say, is where news is heading in the Wild West of social media, where partisan stories often thrive and the old business model is failing. With public-facing editorial standards similar to other media organizations, Courier is an answer to the deluge of false partisan content consumers face, they argue. They also point to the long history of explicitly partisan news outlets in the U.S. and elsewhere.

“More quality reporting with integrity — even if it has a partisan bent and as long as it that bent is disclosed — anything to combat the spread of misinformation is important,” said Nicco Mele, the former director Shorenstein Center on Media, Politics and Public Policy at the Harvard Kennedy School, who is supportive of Courier.

But while some Democratic operatives concede the premise that their party needs to be more competitive online, they believe Courier and Acronym’s tactics are unethical but also ineffective given the high cost.

Courier is not the first to experiment with versions of this model, but it is likely the most robust attempt so far. In 2014, the Republican Party’s congressional campaign arm set up “news” sites that criticized Democrats and bought ads on Google to promote the pieces. At the time, the Democratic Congressional Campaign Committee blasted the Republicans for “deception.” Asked if they approved of Courier’s 2020 tactics boosting their members, the DCCC did not respond to repeated requests for comment.

“We look forward to Democrats denouncing these dark money fake news groups meddling in our elections,” said Bob Salera, a spokesperson for the National Republican Campaign Committee, who said the party no longer operates such sites. “Since they represent everything Democrats claim to oppose in politics, this should be an easy call.”

Courier’s operations differ from the NRCC in that it is a for-profit newsroom, and election law doesn’t regulate the press due to its First Amendment protections. As a result, Courier raises new digital-age questions about what is and is not a news organization — questions that political ad regulators are unlikely to answer, according to election experts, leaving this murky space open for “abuse,” said Brendan Fischer, the federal reform director at the Campaign Legal Center.

“I don’t know how the FEC would treat Courier because the ‘media exemption’ is the third rail of campaign finance,” Fischer said. “Neither the Democrats or Republican want to be in the business of determining what is a media entity.”

So far, Courier’s web traffic has been light. Its signature site is ranked 76,004 in the United States, according to the Amazon-owned Alexa, and has under 6,000 “likes” on Facebook. The organization did not release any other traffic information. Its most-watched video on YouTube, with over 570,000 views, was a well-reported story showcasing Amazon’s ability to place laudatory stories about itself in local news broadcasts. But the next most-viewed video only had about 2,500 views, and the company’s laudatory clips of their favorite congressional candidates have far less than that. Its YouTube channel has just 735 subscribers.

While campaign finance watchdogs worry about the trend of “dark money” influencing American politics and media experts say that Courier and similar endeavors only further undermine trust in news and shared facts, Courier and their supporters dismiss these concerns as liberal hand-wringing more concerned with being pure than with winning.

“Coupling original, fact-based reporting with paid content distribution, Courier is reaching Americans in their newsfeeds and is providing a powerful counter to conservative misinformation which dominates platforms like Facebook,” Courier Newsroom COO Rithesh Menon said in a statement through an Acronym spokesperson. “We’re so proud of what Courier has built in its first year, and hope others in the progressive space invest in this type of digital media ecosystem – because the Right has for years.” Courier and Acronym did not make anyone available for an on-the-record interview.

With the exception of the targeted Facebook ads, Courier does mostly operate like other explicitly progressive news organizations. It produces long, earnest features — like a 3,000-plus word story on corporate PACs. Its journalists gather quotes and occasionally reach out to Republicans for comment. And unlike many liberal news outlets that chase clicky national stories, many of Courier’s swing-state verticals focus on local issues like school board infighting and police civilian review board meetings. Its newsroom includes reporters that came from more traditional outlets such as The Sentinel, a local paper covering Pennsylvania’s Cumberland County, along with veterans from digital-first progressive outlets like VICE.

But in other ways, the news organization also acts like a loose arm of the Democratic Party. Its seven local news-focused verticals are strategically focused on major presidential swing states: Florida, Virginia, North Carolina, Arizona, Michigan, Pennsylvania and Wisconsin. While the sites disclose they are “progressive” in their “About Us” sections, they also come with nondescript names like Cardinal and Pine for North Carolina, Keystone for Pennsylvania and Up North News for Wisconsin that suggest a more traditional paper.

Experts in media ethics and misinformation worry that the advocacy-cloaked-in-journalism tactic is pouring gasoline on a raging fire of consumer trust and online disinformation.

“It’s super opaque to the consumer,” said Kelly McBride, chair of the Poynter Institute’s Craig Newmark Center for Ethics and Leadership. “When you click on Vox or some other news website that has a liberal bent to it, it still was created with the idea of putting out news for the sake of a business model. In this case, the very purpose for this site to exist is different.”

Jennifer Kavanagh, the co-author of the 2018 RAND study “Truth Decay,” said that Acronym’s project would likely frustrate voters. “From the perspective of a voter who is looking for accurate information on a candidate, it just makes the situation harder. It’s just creating more noise,” she said. She added that Courier is likely part of a larger trend that will at least continue into the near future. “We are in a period where the economic incentives push more toward more subject, more commentary, more gear toward producing a more emotional response and we are a long way from turning the corner of coming out of this.”

The criticism puts some of Acronym’s financial backers in an awkward position. Powell Jobs’ “social change organization,” Emerson Collective, boasts of its media projects “strengthening democracy.” She has invested in a number of high-profile media organizations, including Axios and Mother Jones, and is majority owner of The Atlantic.

“If I were on her leadership team at The Atlantic, I would be talking to her about that,” said McBride.

As Trump pressures schools to reopen, California's 2 largest school districts say they're going to start online only in the fall 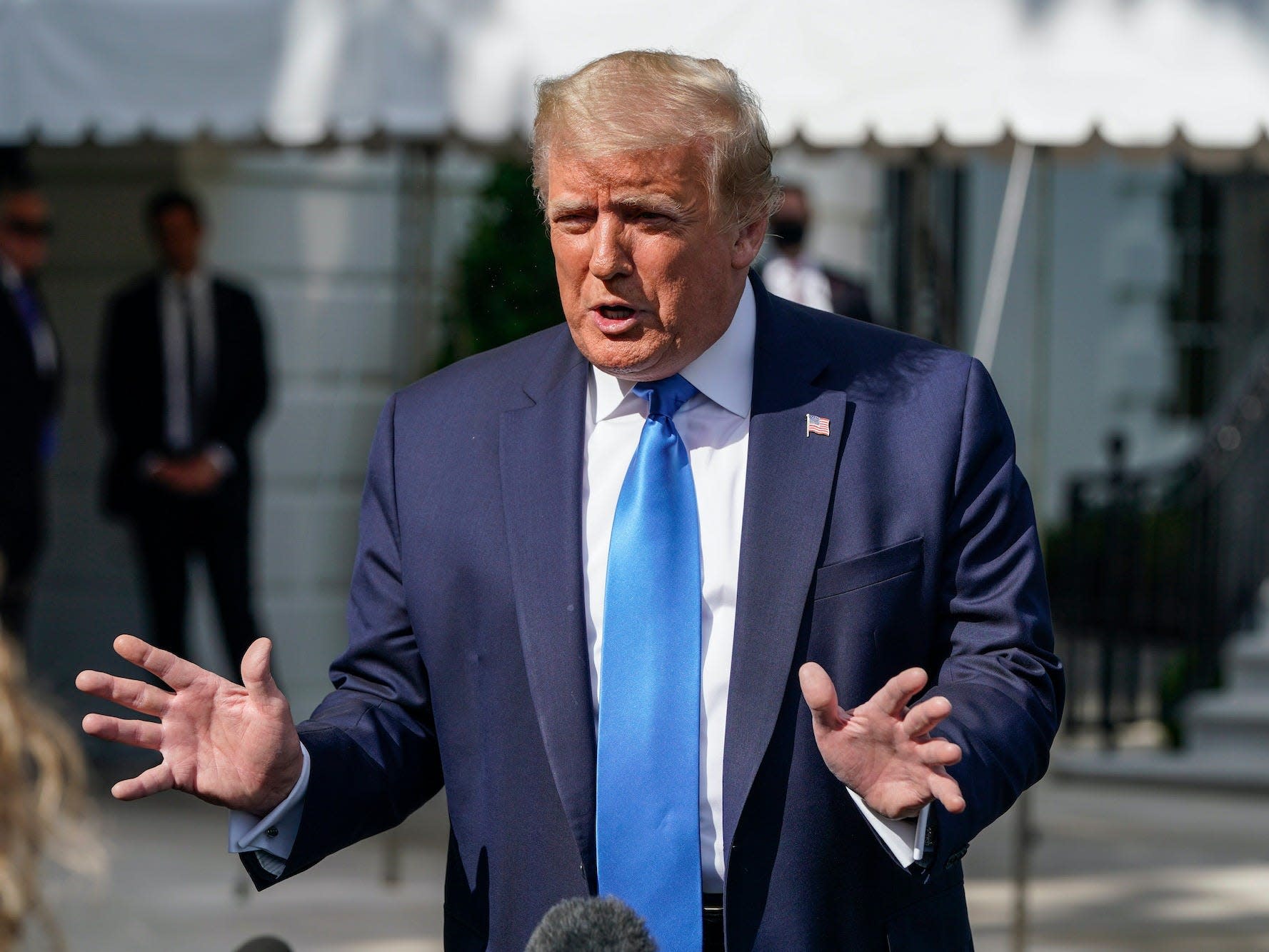