Raising taxes would be “dangerous” and make it harder for Britain’s economy to recover from the coronavirus pandemic, Labour’s shadow chancellor has said.

Anneliese Dodds on Wednesday warned that Labour’s support would not be guaranteed if the government went ahead with a rise in capital gains tax, warning against “last-minute decisions around tax without appropriate scrutiny and without proper planning”.

Laying out Labour’s preferred economic strategy for the pandemic she told a seminar that the government should prioritise a return to growth, and that tax rises would be counterproductive reducing demand.

“There’s been some suggestion, before today’s news around capital gains tax, that there could be a kind of generalised income tax, VAT, or national insurance rise and/or cuts to public spending,” she told the online meeting organised by the Institute for Government.

“I think that would be really quite a dangerous move at a time when the economy is very fragile and some many people are very nervous about buying a new car or putting an extension on a house or whatever it is.

“Now would not be a sensible time to be suggesting to people that either public sector employment could be further threatened or equally on the other side that they could be subject to additional tax.”

Asked whether her approach to the economy differed from her predecessor under Jeremy Corbyn’s leadership, Ms Dodds said: “These circumstances mean that everything has to be different. We are in a different situation.”

The Treasury announced this week that it would be reviewing capital gains tax, with some suggestions that the wealthy could be asked to pay more. The government has ramped up spending during the coronavirus crisis to pay for the furlough scheme and additional support to businesses and individuals – a decision which has led to some calls for tax rises or public spending reductions to pay for the extra expenditure.

But Ms Dodds pointed to the failure of austerity policies after the 2008 crisis and said any changes that might suppress demand risked making debt more unsustainable in the long run.

“We know that that is the best way, in the context of low interest rates, of ensuring the the debt is manageable that we can then have a long term approach on paying it off … I think that not having that focus on putting up demand would be very damaging,” she said.

Ms Dodds added: “I know it was a very different crisis, but we did see quite constrained growth and demand after the financial crisis from 2010 onwards – I think we need to learn from that and not repeat the mistakes of that in our recovery from the current crisis.”

Asked whether Labour would support a rise in capital gains tax, she said: “We would need to look at the detail of it obviously, and what the impact of it would be on the economy, whether it’s properly targeted.

“Above all what we really don’t want to have is last-minute decisions around tax without appropriate scrutiny and without proper planning.”

The shadow chancellor, who previously served in the shadow Treasury team under John McDonnell, said: “Clearly, for a long time I’ve been saying that the UK tax system is insufficiently progressive, that needs to be dealt with – but do I think that tax changes right now are what the government should be focused on? No I really don’t, I think they must be focussed above all on trying to ensure that growth comes back and demand is increased. That surely has go to be their absolute priority.”

Britain suffered by far its sharpest fall in GDP in living memory this year as businesses shut down in response to the coronavirus lockdown. The OECD expects the UK unemployment rate to rise as far as 15 per cent once the chancellor’s “job retention” or furlough scheme ends later in the year.

Wed Jul 15 , 2020
Photograph: Apu Gomes/AFP/Getty Images California’s dramatic rolling back of reopening after a surge in coronavirus cases has left businesses scrambling to make sense of conflicting orders. And for some, it has meant closing up shop all over again. On Monday Gavin Newsom, California’s governor, ordered all bars to shut down […] 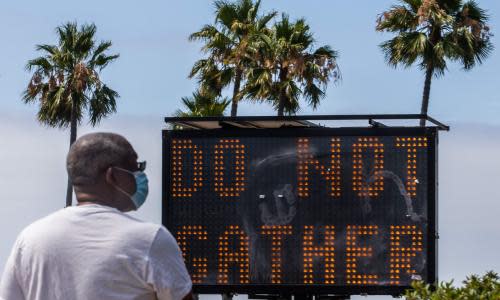