The BBC’s weekly The Boss series profiles different business leaders from around the world. This week we speak to Louise Hill, founder of GoHenry, a banking business that provides debit cards for children.

Standing on the touchline as her son played football, Louise Hill started moaning about how her kids’ spending habits were spiralling out of control.

At the time her son was eight and her daughter was 11. Louise was so frustrated by how much they were buying online that she would pin Apple invoices to the fridge door to help her kids understand why their £4 a week pocket money was now just 50p.

The two other parents she was chatting to back in 2009 had similar stories, so the conversation really struck a chord. And inspired the beginning of a business.

“One of the dads started talking about how his son had bought something on eBay, the other how his daughter had spent £2,000 through PlayStation,” says Louise, who is now 57. “There were all sorts of stories. We thought, ‘Surely someone needs to help parents with this?'”

That someone ended up being Louise and the two fathers, Mark Timbrell and Doug Mahy, who started meeting every Thursday night in a curry house in the town of Lymington, in the New Forest, on England’s south coast, to pull together a business plan. Their idea was to create a prepaid debit card and app for six to 18-year-olds that would help children learn how to handle their own finances.

Kids would be able to use the card in physical shops or online, but they’d only be able to spend whatever money their parents had put on the card via the app.

Mums and dads could also use the app to keep a watchful eye on their children’s spending or set limits, establish regular pocket money payments, or make one-off payments if the kids had done a certain task, such as wash the car.

The business would make its money by charging the parents a monthly fee per child, which currently stands at £2.99.

Louise, who previously worked in e-commerce, was confident that the idea would be a success. However, it took two years to raise the £700,000 required to launch the business, and plug into its banking partners – payments giant Visa, and bank IDT Finance.

“I can’t tell you how many pitching sessions I went to,” she says. “But we managed to pull together a group of high net worth angel investors who were really excited about it, and clearly shared our vision.”

The business was originally called PKTMNY, standing for “pocket money”, but the name was changed within the first year of trading as the company felt that the original moniker was difficult for people to search for.

GoHenry was chosen instead in honour of the firm’s first customer, an 11-year-old boy called Henry.

To grow the business in its early days, Louise says they tried adverts on local radio, partnerships with schools, and attending summer fairs, such as the New Forest Show. A quarter of customers stemmed from recommendations from others.

Today the London-based company says that more than one million children have cards across the UK and US.

Louise says the app is designed to teach children to be “savvy consumers”, and learn that “money doesn’t grow on trees”.

However, some parents have used review website Trustpilot to complain that GoHenry’s monthly fee is too high. Rivals such as Nimbl and Osper are cheaper at £2.49 and £2.50 per child respectively.

“We have to charge something as we cannot afford not to,” says Louise, who is the only founder left in the business, after the other two departed within the first two years to pursue other interests.

Helen Saxon, banking editor at MoneySavingExpert.com, says that GoHenry is popular because of its functionality, such as parents being able to receive notifications on their mobile phone when their child’s card is used.

“[However], it does have similar competitors, most of which are a touch cheaper – Nimbl, Osper and Rooster Money – who all provide a similar service,” says Ms Saxon.

“And none of these compare well [on cost terms] with High Street bank accounts for kids, which don’t have fees, and often actually pay interest when there is money in them.”

She adds that most banks only offer accounts to children aged 11 and over though, which makes GoHenry very useful, because it is open to younger kids.

“If you’re looking to teach your [young] child about how to handle money, these cards will help,” says Ms Saxon.

GoHenry now has 150 staff across its three UK offices in London, Lymington and Farnborough, and its US base in New York.

The firm launched in the US in 2018, and is now focused on growing its market share in both countries. This expansion is being led by chief executive Alex Zivoder, a former director at ticket business Viagogo.

He was appointed by Louise in 2015, when she switched to the role of chief operating officer, so she could focus on “day to day operations”. She remains a co-owner of the business.

“A good founder has the company’s best interests at heart, and is constantly questioning what the company needs,” says Louise. “And sometimes that may not be you as chief executive.”

Louise’s children, whose overspending inspired the creation of the business, are now 19 and 22. “They are both confident with money,” she says.

Can you still get cover in the age of coronavirus?

Mon Jul 13 , 2020
Getty/iStock As holidays and business travel abroad resume, many people are concerned about the risks posed by coronavirus – and the problems they may face getting adequate insurance. These are the key questions and answers. I booked my August holiday to Greece last January and took out insurance at the […] 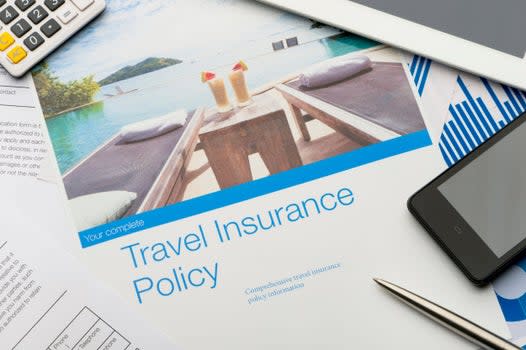