When Los Angeles resident Katonya Breaux was in her late 30s, she began noticing black moles on her face. It was an occurrence she assumed was genetic after witnessing the same spots on older women in her family. Breaux, the mother of singer Frank Ocean, consulted with her doctor on how to slow down the appearance of more spots.

She was met with a surprising response.

He said, ‘You know it’s not genetic, right? It’s sun damage,’” says Breaux, who, as a Black woman, had not worn sunscreen on a regular basis.

“I went to Walgreens, didn’t know anything about sunscreen and grabbed what was there. The products I tried led to skin irritation,” says Breaux, who discovered mineral formulas, which were less irritating yet created a chalky white cast on her skin. “Other brands were not tinted with me in mind and left me either gray or lavender.”

The frustration she faced ignited a search to formulate a mineral-based sunscreen focused on darker skin.

Breaux, who was working in custom-home building at the time, had no plans to create a beauty brand. However, she found a chemist to work on a formulation for her personal use and developed a sunscreen product that was mineral based and tinted to suit shades ranging from what she refers to as “olive to a nice, dark chocolate.”

What began as one product meant just for Breaux has since skyrocketed into Unsun, a business of sunscreen for the face, body and hands and made for all skin types. The brand is helping lead the conversation about diversity in beauty and educating the Black community and other communities of color about the importance of sun protection.

“What studies show is that people of color don’t get cancer as often but we die of it more often,” Breaux says. “It’s been ingrained in us that the sun does not impact us in that way. We also suffer more from hyperpigmentation and premature aging. The sun really does not discriminate. It affects us all in ways that are not good.”

For Shontay Lundy, creator and founder of Los Angeles-based Black Girl Sunscreen, the search for sun protection made for darker skin came up short.

Spending time outdoors in the sun in South Florida, her home before relocating to Los Angeles, and then hiking regularly in the canyons of Hollywood, Lundy was keen to apply sun protection but not the type that was being offered on a wide scale. Therefore, she created Black Girl Sunscreen in 2016, which is the first Black-owned indie beauty brand in the sun-care aisle at more than 200 Target stores nationwide.

“I was hiking so much, and friends would offer me sunscreen. But it wasn’t made for me,” says Lundy whose company is in Sherman Oaks. “I went online to try to find sunscreen for darker skin and came up short. I realized there’s this white space here, and clearly no one is talking to me. There has to be another me out there.”

Lundy launched with just one product. It was an SPF 30 lotion that dries sheer and leaves no white residue. As the product page on the Black Girl Sunscreen website states, “Sunscreen made by women of color for people of color, because we get sunburned too.”

Lundy prioritized a formula lightweight enough it could be worn under makeup. The brand now has a second product, Black Girl Sunscreen Kids, an SPF 50 lotion that, like the rest of the line, is free of fragrance, silicones, parabens and aluminums. The products are also reef-safe, vegan and cruelty-free.

Lundy’s brand has been on an upward trajectory since its launch. She secured a major retailer in Target and a financial partner. Recently the brand was featured on the well-followed Instagram account @black.owned.everything, started by Beyoncé’s stylist, Zerina Akers.

“I wanted to be very clear and very intentional about who I was speaking to,” says Lundy about the name of her brand. “I envisioned that one day we would be in the sun-care aisle and want the consumer to pick up, or not pick up, the product. And there would be no question that it works on their skin. It eliminates a couple of barriers. As a woman of color, you can be assured immediately, ‘OK, yeah, this should work for me.’”

This clarity is imperative, considering the dearth of beauty products made with people of color in mind. Major beauty brands have historically had limited foundation shade ranges, and makeup color centered on fair complexions. Until brands such as Fenty Beauty, Mented, Black Up, Nars and Black Opal introduced or expanded their lines, the lens through which beauty products were created did not reflect the varied skin tones and needs of consumers.

“When I first started working over a decade ago, products and sunscreen for darker skin wasn’t even a conversation,” says Dr. Carlos Charles, a New York-based dermatologist whose practice, Derma Di Colore, specializes in treating people of color. “We would talk about it but you would really have to search for it. There’s since been an uptick in the creation of products for people of color and definitely within the sunscreen world with Black Girl Sunscreen and Unsun. Even just the fact that these companies are having the conversation with people of color directly is incredibly needed. By these companies seeing people of color, they are opening up the conversation and breaking that barrier.”

In addition to an inclusive product offering, education and continued conversation are pillars of Unsun and Black Girl Sunscreen. Lundy has partnered with melanoma organizations, and Breaux speaks on numerous panels and delivers keynote addresses about the effects of the sun on all skin tones.

About speaking to the beauty industry, Breaux says, “It’s definitely a combination of both — discussing the importance of sunscreen and companies recognizing people of color.”

Tennis champion Venus Williams recently joined the sun-protection industry with the release of a sunscreen called EleVen by Venus Williams. It also serves the need for products made with darker skin in mind.

“Because of my career, my entire life has been spent outside, and there were definitely times early on that I wasn’t prioritizing skin protection as much as I should have,” Williams says. “I wanted to provide consumers with a clean sun-care option that was versatile enough to fit everyone’s needs.”

Seeing a significant gap in the market for a product that was clean and did not leave a white residue, Williams partnered with clean beauty retailer Credo and the Sunscreen Co. to create a formula that could address both concerns. “Credo has an incredibly high standard when it comes to clean beauty, so I fully trusted them to help me create a product that was perfect for the full spectrum of skin tones,” Williams says. “It’s definitely a year-round staple; the sun doesn’t only shine in the summer.”

Adds Sara Dudley, chief executive of the Sunscreen Co., people with “darker skin tones have typically had to make a concession. Either they use a conventional sunscreen with chemical filters that have a host of issues. Or they use a mineral one that is low in zinc oxide and therefore not giving as much protection as it should. Past formulas have also used tints to try to cover the white cast they would otherwise leave behind.”

Breaux and Lundy say the quality of the product is as imperative as the need for representation of people of color.

“Cosmetics are supposed to make you feel good, and that’s not what sunscreen is for women of color,” Lundy says.

With sunscreen products made specifically with darker skin in mind, Charles says, “Being seen is a huge part of what we’re talking about. Understanding that ‘This is being made expressly for me. I’m glad this company thought about me and put in the effort to make this for me.’ People of color feel valued because they are.”

Most engaged couples proceed with summer weddings despite pandemic

Thu Jul 16 , 2020
Benjamin Romer and Melanie Middleton’s wedding on June 27, 2020, wasn’t the wedding they had planned, but it was the wedding that their guests called “heartfelt” and “how it should be.”   They didn’t have any of the emblems of modern weddings like bachelor or bachelorette parties, a bridal shower, or […] 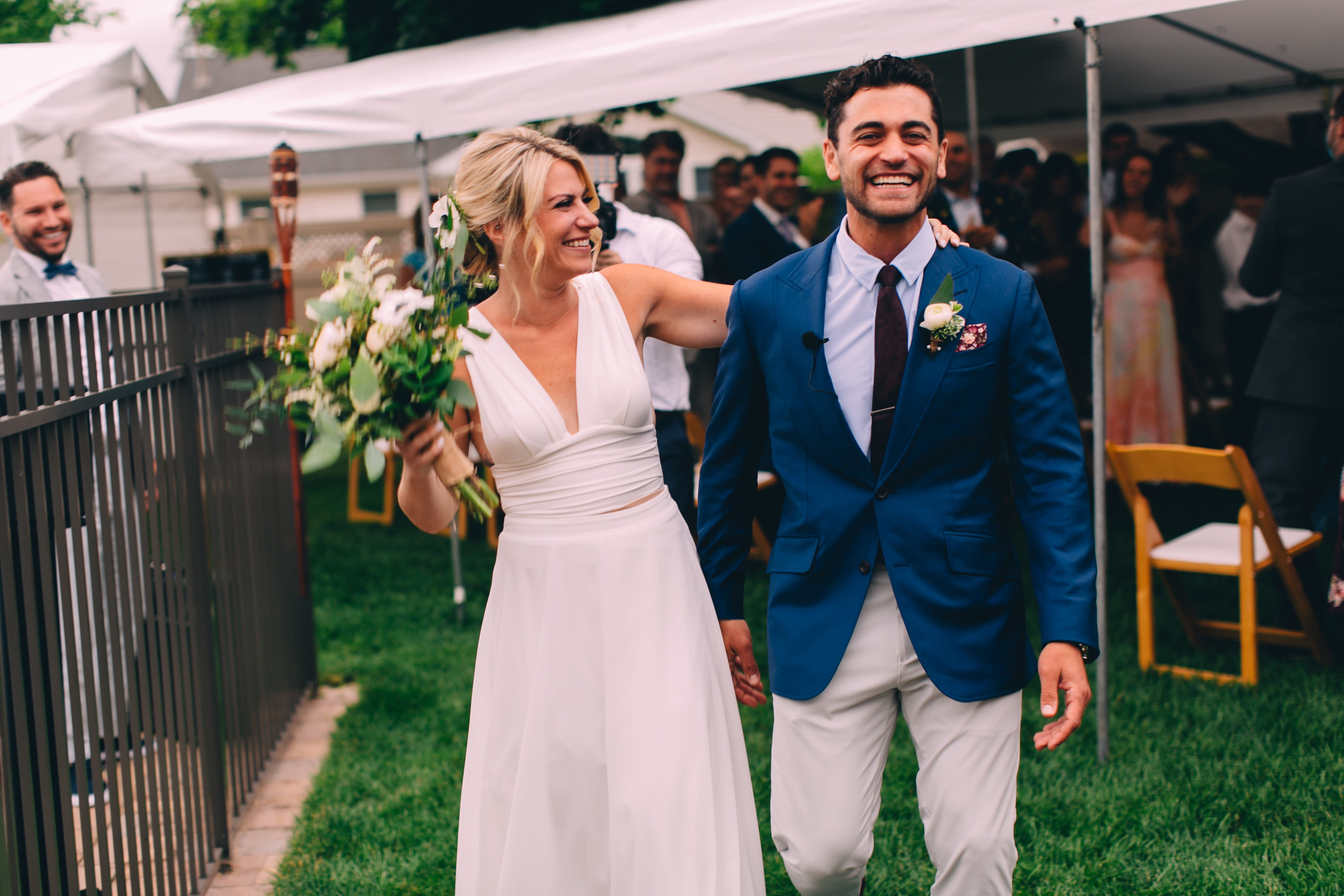