The UK’s economy shrank by 19.1% in the three months to May, as the full impact of lockdown was felt, the Office for National Statistics has said.

Manufacturing and house building showed signs of recovery in May as some businesses saw staff return to work.

Despite this, most of the economy was “in the doldrums”, the ONS said.

“The economy was still a quarter smaller in May than in February, before the full effects of the pandemic struck,” said Jonathan Athow, deputy national statistician for economic statistics at the ONS.

“In the important services sector, we saw some pick-up in retail, which saw record online sales. However, with lockdown restrictions remaining in place, many other services remained in the doldrums, with a number of areas seeing further declines.”

May’s modest month-on-month expansion was less than the 5% or so that economists had expected.

It came as sectors such as manufacturing, construction, DIY retailers and garden centres were allowed to reopen.

Manufacturing grew by more than 8% during the month, as did construction.

“I know people are worried about the security of their jobs and incomes. That’s why I set out our Plan for Jobs last week, following the PM’s new deal for Britain, to protect, support and create jobs as we safely reopen our economy.

“Our clear plan invests up to £30bn in significant and targeted support to put people’s livelihoods at the centre of our national renewal as we emerge through the other side of this crisis.”

“The pick-up in output in May is more likely to reflect the partial release of pent-up demand as restrictions began to loosen rather than evidence of a genuine recovery,” said the BCC’s head of economics, Suren Thiru.

“While UK economic output may grow further in the short term as restrictions ease, this may dissipate as the economic scarring caused by the pandemic starts to bite, particularly as government support winds down.”

A quarter of the economy’s output was lost under lockdown in March and April, and May’s figures show even firms who are back in business may be struggling to get on track.

It’s one thing being allowed to open the doors again (and some firms remain mothballed); another to be confident you can do so safely. And then there’s the biggest hurdle of all; ensuring customers are willing and able to spend again.

As job losses mount, it clear that even some firms who qualify for government help, are faltering. Some won’t have made it as far.

The Bank of England’s own chief economist is among those who’ve voiced hopes for a “V-shaped” recovery; a swift and full bounce back in activity.

But history tells us that economies can take years to make up lost ground after a slump. The blow from this crisis was felt within days; convalescence may be tougher. And in the meantime, the livelihoods of many may feel the strain.

Wear a mask in shops or risk fine

Tue Jul 14 , 2020
The new policy marks an about-turn on the issue after days of uncertainty. CREDIT: BLOWER – BLOWER If you want to receive twice-daily briefings like this by email, sign up to the Front Page newsletter here. For two-minute audio updates, try The Briefing – on podcasts, smart speakers and WhatsApp. Shoppers who do […] 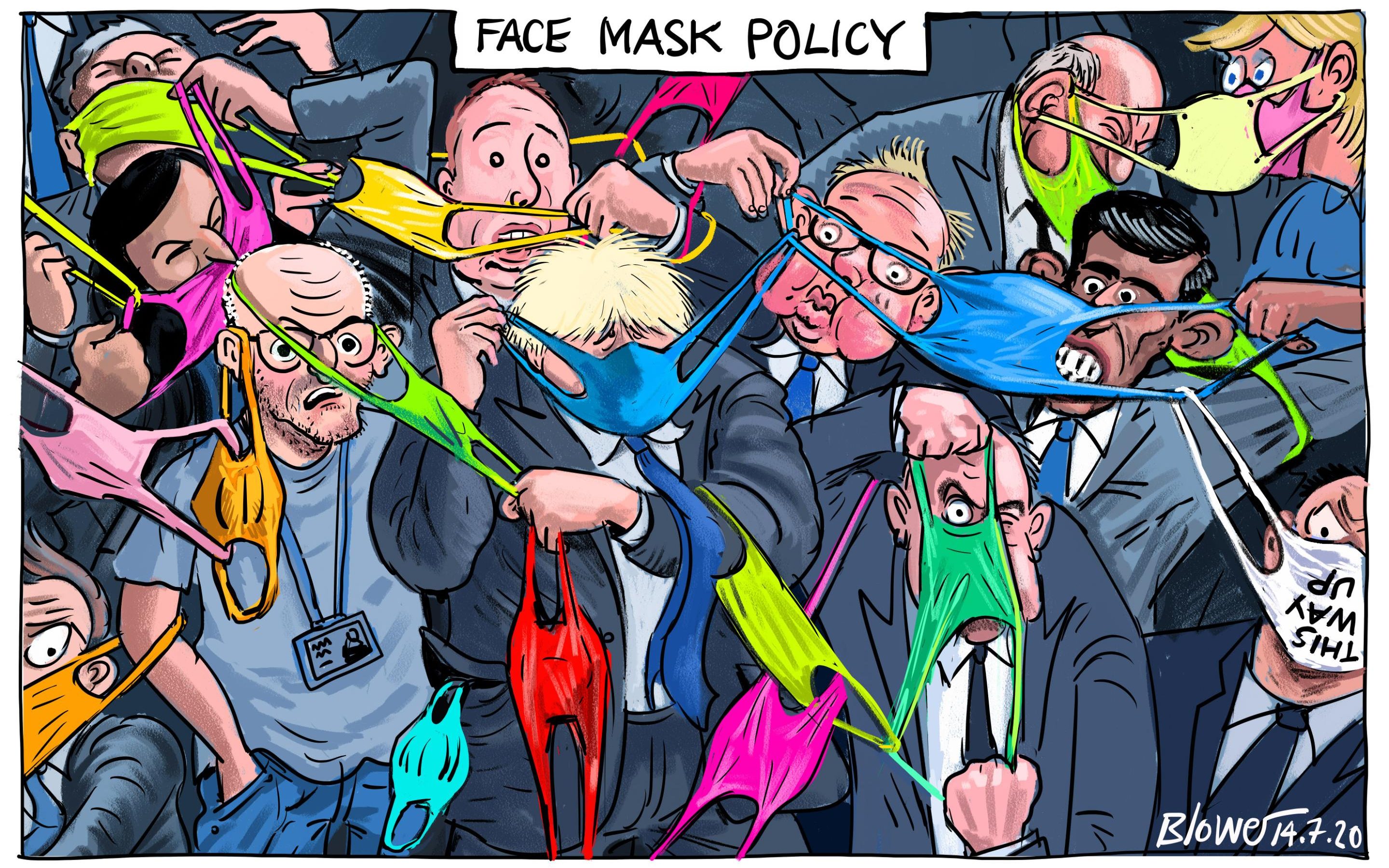