As Miami-Dade County — the epicenter of the pandemic in Florida — reports thousands of COVID-19 cases each day, some faculty and staff at the University of Miami are pushing back over the school’s plan to reopen its campuses, feeling the administration has ignored their pleadings over personal safety.

The private university, based in Coral Gables, granted its nearly 17,000 students the power to decide how to learn, but failed to do the same for many of its approximately 16,000 faculty and staff, full and part time, some employees said.

Students got two choices: Take classes entirely remotely, or return to campus and take some classes in person and some online, which UM describes as a “hybrid protected model.” UM encouraged professors who qualify as vulnerable with underlying medical conditions, as defined by the Centers for Disease Control and Prevention, to request accommodations, but didn’t do same for those who simply feel unsafe.

That’s the case of Scot Evans, a Faculty Senate member and the president of the UM chapter of the American Association of University Professors.

“I personally don’t feel safe teaching face-to-face,” he said. “I’m not in any risk categories, and I don’t have any family members at home, but at the same time there’s so much uncertainty about this disease and its effects that I don’t feel comfortable being exposed.

“Things have changed to the degree where the university needs to abandon its original plan and go online at least temporarily until we see a steady decrease in cases.”

With the U.S. cases surging, Harvard University and other universities have announced they are teaching their classes remotely this fall.

More than a dozen UM professors, lecturers and graduate students — some who didn’t want to comment for this story for fear of retaliation — raised the same concerns as Evans. Employees also questioned UM’s top-down approach in the decision-making process and what they say is a lack of shared governance. More than 500 faculty members have signed a petition seeking that they choose how they will teach.

A UM spokeswoman declined to arrange an interview between a university official and a Herald reporter Wednesday. Instead, she sent a written statement credited to Jeffrey Duerk, the executive vice president for academic affairs and provost.

In the statement, Duerk called the reopening process a “complex” one and said UM has been working with “faculty, deans, the Faculty Senate, Student Affairs, Facilities Operations & Planning, and numerous public health experts on safe solutions.”

Duerk said “all faculty were able to submit a request for teaching accommodations and/or modifications.”

But some professors said they have not been consulted, igniting a “revolt” among the educators, Evans said. He said instructors have been sending emails and talking to their supervisors about their growing anxieties. Among their concerns: the quality of education inside the remodeled classrooms and the lack of support for staffers who care for children and seniors at home.

Duerk, President Julio Frenk and Faculty Senate leaders received the petition Wednesday from faculty and staff, which called for the administration “to acknowledge the right of all teaching staff to decide for themselves” whether they teach in person or remotely during the fall semester.

In part, the petition reads: “We recognize the financial concerns of university leadership and we share a strong commitment to excellent education. However, we believe that the individual and public health risks posed by COVID-19, especially in the South Florida area, are too high at this time to justify a general return to in-person teaching.”

The Faculty Senate will gather for a special meeting with the provost and president’s staff Thursday to address these issues. Other meetings between management and members of departments, schools and colleges are also taking place.

Duerk didn’t mention the petition in his statement Wednesday but said: “The University of Miami remains committed to everyone’s safety and well-being, and to our educational mission and our pledge to provide our students with the best possible educational experience.”

Evans said the problem stems from the business model that UM and other colleges and universities have adopted because it treats the students as customers, and therefore views them as its “main constituency.”

That’s why, Evans said, UM prioritizes what its clients, those who pay tuition, want for the fall.

“But to do that and then not consult with those of us who are in the front lines in the classrooms just seems like a major oversight at best, and at worst, some type of exertion of power for the administrators to say, ‘We’ll decide what’s best for you, and you’ll go along with it.’”

Students have until July 27 to fill out a survey to let the university know how they prefer to learn. That’s roughly three weeks before classes begin Aug. 17, a week earlier than usual to prevent students from returning to South Florida after their Thanksgiving break to potentially reduce virus transmission.

The July 27 deadline, professors say, leaves them little to no time to plan their corresponding coursework.

MDC, the largest community college in the country, will use temperature checks in the fall

Being put in a ‘tenuous position’

John Funchion, an associate professor at the Department of English, said he lives with someone classified as “at-risk” by health experts so he requested to teach online for the fall but hasn’t heard back from the university yet. He has been preparing different rubrics for his students.

This summer, he taught a class in Gothic fiction and said he had more than a month before it started to restructure the content for online delivery, which involved building a website for the course. He would like that same time to prepare for the next semester.

“We’re being put in a tenuous position because the closer we get to the fall semester, the harder it’s going to be to design a quality course,” he said.

University of Miami students to return in the fall to Gables campus, despite coronavirus

Professors remain troubled about new safety measures inside the classroom. Many challenged the impact of Plexiglass between them and students, and found it alarming that they would have to monitor whether students were wearing masks appropriately.

“The common theme is the top-down control over course delivery and that coming from individuals who aren’t really spending any time in the classroom is just deeply problematic,” Funchion said.

When UM first released its plans for the fall, Funchion said he “didn’t necessarily feel a great deal of discomfort about the possibility of face-to-face teaching.” However, as he’s witnessed the positivity rate climb in the past few weeks, he now thinks “the case they’re trying to make is no longer convincing.”

Since July 8, Miami-Dade’s positivity rate of COVID-19 cases has ranged from 16.7 percent to 26.5 percent, much higher than the 10 percent or lower rate that public health officials would like to see for controlling the pandemic.

Instructors have become troubled about the reopening, not only because of the rising number of cases in Miami-Dade County — on Thursday, the county reported 2,723 additional confirmed cases of COVID-19 and 12 new deaths, according to Florida’s Department of Health — but of how they say they’ve been excluded from the decision-making.

Just before presenting it to state officials, FIU rewrote its reopening plan

“We felt we weren’t part of any of the conversations, and that’s really distressing and upsetting,” Funchion said. “And if the end goal is to deliver the best educational experience for the students, then you need to talk to the educators.”

‘Not proud of how UM is conducting itself’

When asked in an interview last Friday about what it would take for UM to dial back its reopening plans or to go fully online at least temporarily, Duerk would not comment and told a reporter he didn’t want her “to get it wrong.”

Funchion said what managers at UM have indirectly told employees is the administration will only backpedal if Miami-Dade County enforces a stay-at-home order.

“The question I have is: Does the mayor and do the county commissioners know that they’ve been essentially tasked with determining how education is going to be delivered at the University of Miami? I’m not convinced that they’re aware of this,” he said.

On Tuesday, Frenk sent an email to the Canes community reiterating the two choices the university gave to the students and outlining the measures the university has taken to keep the campus safe.

The steps included nightly curfews and “restrictions” on on-campus activities, no indoor events until Nov. 1, “random” temperature checks, “mandatory use of face coverings,” quarantines under certain conditions and answering health questions on an app every day.

Yolanda Martínez-San Miguel, a professor and the chair of the Department of Modern Languages and Literatures, emailed the provost and president Tuesday, after Frenk sent out the email.

She demanded answers for the questions faculty members have been asking, expressed her “disappointment” and said she feels “alienated.”

Frenk wrote: “This past Friday, Dr. Anthony Fauci was asked directly whether schools could reopen safely. His recommended approach was this: ‘You have got to say, ‘I’m going to try to open the schools, to the best of my ability. And if there are issues with activity of virus, try to mitigate it by some creative capabilities.’ Our adaptive and responsive strategy taps into our creative capabilities.”

Martínez-San Miguel said Fauci referred to K-12 schools, and the complete transcript shows he also said, “The decision needs to be made state by state, depending on the infection rates in a region.”

“The quote shared is simply taken out of context,” she said.

Additionally, she criticized Frenk’s cabinet for a town hall it held June 30, which didn’t allow employees to ask live questions. Instead, the “virtual event” appeared to be a prerecorded and scripted video.

“I was not expecting to be negligible or invisible as a human being and a faculty member in this University, but it has been happening for weeks, so I think I should share my thoughts with you,” Martínez-San Miguel said. “I am not proud of how UM is conducting itself during a pandemic that endangers our health, safety and lives.”

Thu Jul 23 , 2020
Hello, everyone! Welcome to the new edition of Insider Today. Please sign up here. QUOTE OF THE DAY “Person, woman, man, camera, TV … if you get it in order you get extra points.” — President Donald Trump bragging about his performance on a test given to screen people for […] 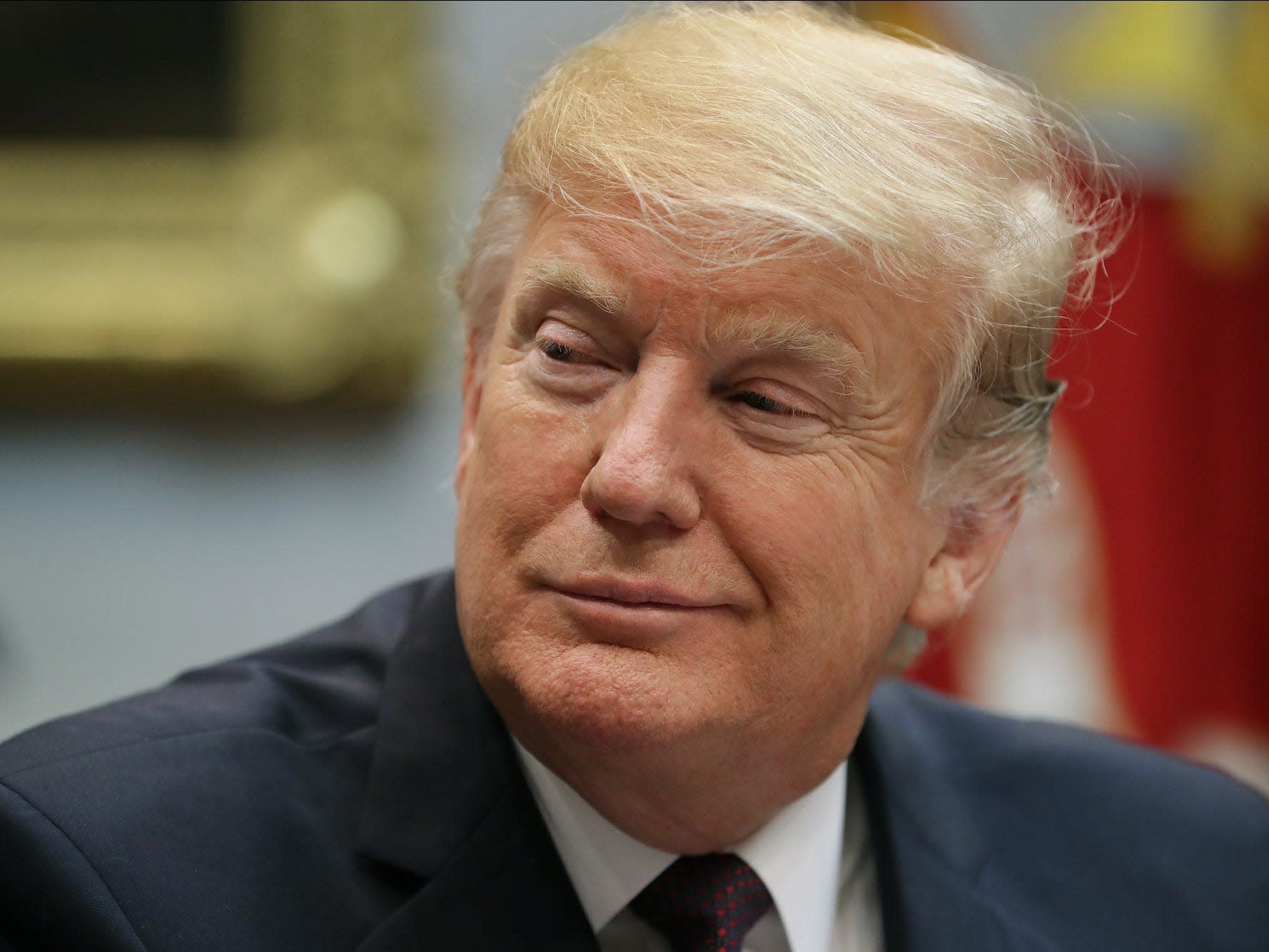